None in Three UK policy forum a resounding success at the close of four-year GCRF project.

The Ni3 UK team were delighted to see the level of engagement and positive feedback at their second online policy forum last week, held almost exactly one year on from the first event.

While the first policy forum focused on the UK team’s qualitative research with women who had experienced intimate partner violence and men who had perpetrated it, this latest event, held on 24th March 2022, focused on the child-centred and violence-prevention aspects of None in Three’s work. To that end, the event was billed ‘Keeping young people safe’ and brought together an invited cohort of more than 100 delegates from the education, policy, charitable and policing sectors, to consider some of the issues around safeguarding young people and how best to prevent violence developing in their intimate relationships.

Leading and chairing the event, Gill Kirkman, UK Country Director for None in Three, opened the session with a summary of the Centre’s work. She went on to welcome West Yorkshire Mayor, and the UK’s first woman metro mayor, Tracy Brabin, who gave the opening address, stating her support for projects like None in Three, which are essential in the collective effort to end violence against women and girls.

Academic guest speaker Kristina Massey, of Canterbury Christchurch University, then gave an insightful presentation on the impact of widespread viewing of pornography on young people’s attitudes and behaviours around sex and intimate relationships. Her own research, and the resources she shared, underlined the need for reliable, accessible and widespread education on sex and relationships, to counter the unhealthy messages absorbed when pornography is the most prominent source of information for young people in their formative years.

The Ni3 games development team – Craig Gibbs, Hayley Royston, Adam Cowell and Alexis Sarmiento – gave a behind the scenes view of how the Ni3 UK game ‘Danielle’ was developed, based on empirical research and using motion capture technology to create an immersive, engaging experience for players. Game play footage showcased the finished product to the delight of many attendees, including Ni3 former colleagues who had not yet seen the game completed.

Ni3 Centre Director Dr Nadia Wager and Research Assistant Sam Mason walked delegates through findings following data analysis from randomised controlled trials of the game, conducted in seven schools across England between September and December 2021. Indications are that the game, even as a standalone intervention, played for a limited period of time, has a positive impact on players, particularly in relation to their attitudes to online and psychological abuse in relationships. While girls displayed more gender equitable attitudes than boys prior to game play, boys’ attitudes caught up with those of girls, after game play.

Dr Priti Chopra of Greenwich University was responsible for developing the facilitator’s guide including curricular materials to accompany the game. She gave an engaging presentation of the process and considerations in developing this resource, also based on research, and developed in consultation with educational and subject area experts. There was a good deal of interest from both school-based educators and those working in other settings such as youth groups, and with young offenders, in using and adapting the resources available. Priti offered to work with anyone wishing to adapt the materials for their context.

Perhaps the highlight of the event was hearing directly from some of the young people who had played ‘Danielle’ as part of the game trials. Recordings of their insightful and articulate reflections on the game and its potential had been captured some weeks after they had played the game. Even at this stage, it was clear that the experience had had a lasting impression, and their suggestions for future games on similar, serious topics were welcomed.

Rachel Williams, the prominent campaigner, founder of Stand Up to Domestic Abuse (www.sutda.org) and long term supporter of Ni3, joined the event to provide her reflections on the proceedings and the importance of education to prevent gender-based violence, in the plenary session. Her first hand experience of intimate partner violence and its devastating repercussions was a humbling reminder of the urgency of the issue, with her resilience and humour providing a fitting summing up of the afternoon’s session.

Nadia Wager shared insights into the Ni3 Centre’s plans for continuing its work both internationally and in the UK. Everything we do is reliant on project funding to enable it to continue, and as such the Centre has a number of applications under review and in development. Delegates were encouraged to keep in touch with Centre colleagues and to approach them with any suggestions or ideas for future collaboration (anyone wishing to contact the Centre should contact us via our email address: noneinthree@hud.ac.uk).

Both at the start of the event and at its close, impactful creative interpretations of Ni3’s research with people who have experienced intimate partner violence were shared, including a short film by Ella Caton and a series of still images by photographer Suzie Larke.

The last word on the event’s success and impact on its attendees is best left to the delegates themselves. Here are just a few of their comments shared in the Teams chat towards the end of the session:

“I learned more today about GBV among young people than I could have imagined I needed to know. There are no words for how ground breaking this project is.”

“I’m a childrens nurse and have been affected by domestic abuse and violence and I think this resource is wonderful, I will definitely spread the word, thank you”

“great event – thanks to you all for your insightful presentations – very much enjoyed and for all the presenters for sharing experiences. I think this is a most fantastic resource, well researched, based in the reality of an evolving agenda – count us in for the future”

“This session has been informative and engaging, with creative resources to share. Thanks to everyone involved.”

“Thank you for such a wonderful, informative event.”

“Brilliant, every single contribution has been so informative and engaged me throughout; even after a long day at work!”

Our delegate resources can be found on the event webpage, where links to the Ni3 UK game and facilitator’s guide can also be found. 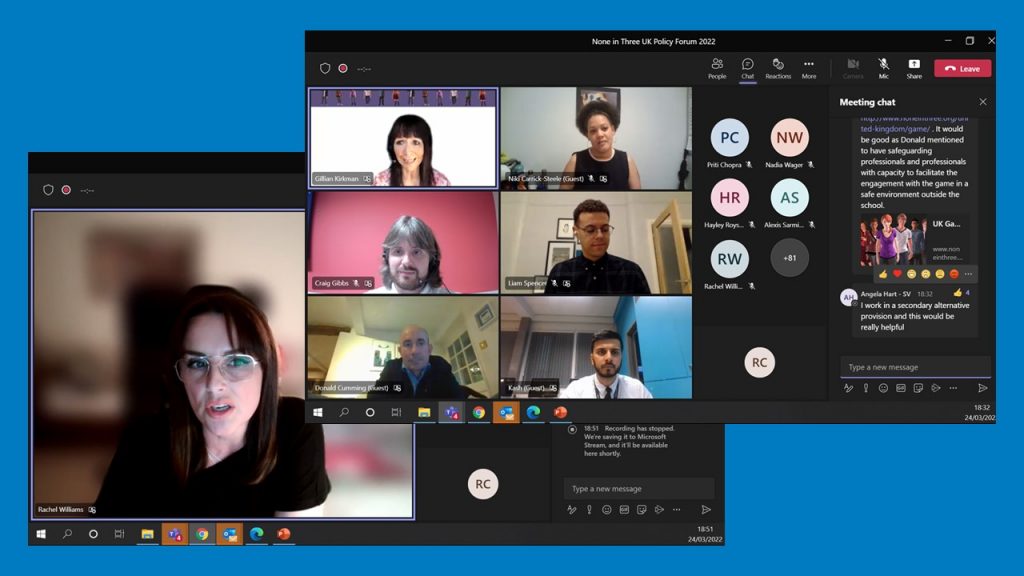